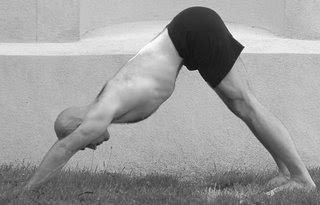 Downward Dog (adho mukha svanasana) was a posture that I had hated for a long time. I remember Scott Davis (our teacher) would keep Saffron and I in the pose for what seemed like a dogs ages :).

Now it is an all around favourite. Some of the things that are so invigorating about this pose were the exact reason it was so formidable back then. We are supporting perhaps 40% of our body weight with our upper body depending on how far our legs are from our hands. This makes for an opportunity to bring good stress to the bones, muscles and joints of the upper body which can help prevent diseases associated with under use of the upper body i.e osteoporosis.

There are some interesting benefits to the fact that your brain is now essentially lower than your heart which makes this pose technically an inversion posture.

What you want to make sure of is that you are not putting excessive stress on the shoulder joint or wrist, particularly at the sides of the neck by the shoulder or in the arm pit. By feeling for openness and softness in the skin you can find the right muscles for making the adjustments comfortable.

If the leg muscles slacken, this can drop more weight on the shoulders and wrists, so using the legs to help you lift out of the pose is valuable work.

The straight line you see from my hips to my hands is not possible for a small percentage of the population due to certain length of bones. Same goes for heels touching the ground, not everyone is able nor needs to do that. This is why a key instruction in Yoga is not to force.

If you can stick with this posture for a few weeks you may learn to love it, it is one of my favourites now.
Posted by B at 8:33 PM No comments:

Designers Catching on to Yoga Wisdom

A German company Festo has finally caught on to what Ancient Yogi's realized thousands of years ago. Study nature to learn the best way to use energy.

Ancient Yogi's spent time observing animals and nature to help understand ways of conserving energy while promoting deep connections with the physical body.
They learned so much from nature that many of the Yoga postures are named after animals or plants.

After years, in technology, of using pushing methodology for generating pneumatic forces Festo has developed a product known as the Fluidic Muscle.
Behaving much like a natural muscle these Fluidic Muscles actually contract like an anatomical muscle when air pressure is applied to them.

The results are almost artistic as you watch the grace with which realistic movements can now be performed.

So how does this apply to Yoga? Well for many, the tried and true method of getting anything done is willpower and sheer effort. You can spot these people in a Yoga class a mile away. They are straining, grunting and sweating. Often making jerky and forced movements to get into the next position.

Observing nature can be very valuable. We have mirror neurons in our brain which help us to learn by observing. By watching the fluid movements of animals it may be possible to incorporate that into our own improvements of grace while floating into Crane pose.

Watch these fascinating videos to see how technology is evolving.

This video demonstrates the way the Fluidic muscle contracts when activated.


The Manta Ray is known for its efficient use of energy as it floats through the water.


Awkward on land, Penguins are incredibly quick and nimble under water.

It is interesting to note that the Yoga Master we studied with in India in 2003, K. Pattabhi Jois, was 88 years old at the time and is still active now.

His student B.N.S Iyengar, whom we also studied with, was 78 and he is still actively teaching today.

Their teacher T. Krishnamcharya, and arguably the biggest single influence in Yoga, lived to over 100 years old.

While not a comprehensive study of longevity by any means, living a balanced life and sharing that with others in a supported social environment is a wonderful way to invest our time.

Letting go is a big concept in Yoga. It is usually termed releasing attachment, non-attachment, or non-grasping (Aparigraha in the Yoga Sutras).

Most of us have attachments to material or external things and we frequently have them removed from us against our will, resulting in a sense of loss or suffering. When our goals aren't reached. When our children no longer follow our wishes. When our job is lost. Or, the ultimate challenge, the death of a loved one.

We really and truly can never HAVE anything, so it is a misconception that attachment is even possible. It is actually impossible. We could even say that we really only borrow our body for a century or so. When we acknowledge how temporary everything is, we can really enjoy what and who we have while they are with us, and we can grieve and move on when they are taken away.

When you live fully in your intentions and let go of the results. You can live a life of passion and purpose in a way that isn't devastated by all of the eventual set-backs and obstacles.

As teachers, Saffron and I are always discussing the ways that we can make Yoga accessible without imposing our own idea of how things need to be. We all face this difficulty as we seek to bring a positive influence into the lives of others (kids, employees, co-workers, family) without imposing our personal agenda that is often cluttered with our own personal blind spots.

Non-attachment is not without passion, we can be very passionate about inspiring others. Non-attachment asks us to look at how we "expect" it to turn out.

Try letting go of how it is supposed to be. Correct your course, but also correct your map occasionally. That large boulder might not be on your map but it is there now. Why crash against it or rail against it for being there? Walk around and let it go..

Oprah, Noprah, and the Anthropic Principle

I am not going to presume much about what you think or know about this.

I would like you to just think about it


Now as you think about this a number of things could come up for you.
If you like or respect what Oprah has done, or you believe strongly in a faith or positive thinking this won't be much of a video to shake that.

If you don't like or respect Oprah this video may confirm the thought that I am going to ask you to entertain.

I am not judging Oprah one way or the other. She has done some great work and some not so great work. Human like the rest of us just a lot more successful at it. In fact, I commend her for the cover of her January 2009 magazine showing us how she has "Fallen off the wagon" in terms of gaining her weight back. This is something I would love to see more of on the magazine racks, we are wrestling with life's challenges, we all have set-backs and not everything works out like we have it planned.

I would like to call attention only to the implied theory behind the video. And that is the one that says if we really, really want something, really devote ourselves to it, really pray or surrender or follow any other idealistic wishful thinking available, it will happen for us.

So that is why I would like to introduce Noprah. I am being a little cute by introducing this person but it is for a purpose.

Say Noprah has also read this book "The Color Purple", loved it, is telling everyone about it and handing out copies. She has also been called to the interview (I have trouble believing that someone just called Oprah out of the blue without there being some idea in that persons mind that Oprah was seriously thinking about playing this part) and also tried out for the part.

Noprah, of course will have her own story about what happened to her, i.e. the diet camp she may have went to or maybe she felt she was too skinny for the part and has started eating more to fill out for it. When it comes down to selection time, what is the criteria that determines who is more likely to get the part.

So "The Secret", being the crappy marketing ploy that it is engaging people in deepening their materialism and consumerism with positive thought and expectancy, tells us that when we really believe something will happen, the "Law of Attraction" will bring it to us.

Well for this article it doesn't matter. Someone always does get selected. The problem is usually that we are only ever hearing from the one Oprah and not the hundreds, or thousands, or millions of Noprah's.
I'm going to link this to the Anthropic principle. To be perfectly honest it will be a very loose connection but one meant to illustrate a point. As I am using it (and this is my version), the Anthropic principle is an evaluation of the idea that we are particularly special in the universe because we exist where we are and that this is so special that it must be more than just luck.
Maybe even meant to be. Everything has come together so perfectly to support us that it is a special gift. This isn't the principle, the principle ask us to consider the vastness of the universe. There are billions upon billions of planets and galaxies that exist (like little Noprah's) all vying for the title of Earth. Who would be around to tell the story of success? Only the one whose conditions were met to allow intelligent life to propagate and rise to a level that lets it look at its position in life and think how it must have been meant to be. There would be no ability to do all this if all the needed conditions were not met.

There may be a little Nearth somewhere out there, the famous Drake Equation seeks to discover the probability of it, that is only a few billion years away from sharing a success story. But we are here and now and cognizant of the fact that we are here and now.

Oprah likes to believe that it was her wanting it that made it happen, but if Oprah had been Hispanic would that have been a problem? If Oprah lived in Tokyo would that have hindered her chances of being called? Malcolm Gladwell's new book "Outliers" discusses the need for conditions to be met before we are going to hear the success stories, answering questions like why are so many NHL hockey players born between January and March? Many of the conditions are well beyond any hoping, wishing, praying, or wanting we could ever do.

This has been a particularly long article so I'll finish with this. If you were to give up this wanting and just be You. If the rewards came and went, or didn't come at all. Can you live a life that is whole and complete?

Resources worth a Million Bucks